Caricatures of Prophet Mohammed on Facebook sparked outrage and censorship in Pakistan last week. Authorities embarked on a large-scale crackdown of the Internet, blocking up to 1,000 sites, including Facebook, YouTube and Flickr, report the Pakistan Press Foundation (PPF), ARTICLE 19 and Reporters Without Borders (RSF).

"Everybody Draw Mohammed Day!" was an event created by Swedish Facebook users, inviting people to post drawings of Prophet Mohammed on the social networking site. Any depiction of the Prophet is forbidden by Islam.

In response, demonstrations took place throughout Pakistan on 19 May condemning Facebook, and the site itself was blocked by Pakistani officials for being "blasphemous and sacrilegious". Thousands have supported the ban, and some have called for the blocking of all Western websites.

But one local cyber activist disagrees. According to PPF, he told the press, "While we recognise that sites on the Internet are used to spew hatred and incite violence, we steadfastly believe that governments have no right to control access to information."

Participants of a media forum who met in Karachi to discuss the ban were assaulted by protesters who accused the group of blasphemy.

In the past, Pakistan has blocked access to YouTube, Blogspot and Flickr, as well as sites that revealed information about corruption linked to political officials and human rights abuses by the army. 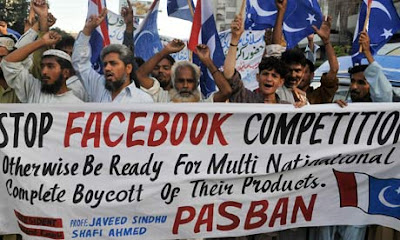